Join us for our January meeting as we ring in the New Year with a meeting dedicated to the invisible art of sound for film with these two enlightening presentations:

HOW TO GET THE MOST BANG FOR YOUR SOUND BUCK!

Victoria Rose Sampson will help start off the New Year with an exploration of post sound discussing the various layers that create soundtracks. She

will also discuss the importance of good location recording and how, if done incorrectly, can add significant costs in post.  In her 40-year career, Vickie has worked on some fantastic films including, Donnie Darko, Pirates of the Caribbean: Curse of the Black Pearl, Star Wars: Episode VI – Return of the Jedi and Speed, from which she will share with us scenes from her work on this Academy Award winning film. Specifically, she will take us through how she recreated the sound for the unforgettable bus scenes where she really worked her audio magic!

This is an amazing opportunity to learn from someone who has an incredible amount of experience including the 25 years she worked alongside her mother, Kay Rose, the first woman to win an Oscar for sound (The River). In addition to own her impressive sound career, Vickie is currently directing films including her current project Shelby’s Vacation. The trailer can be seen here: https://vimeo.com/183218223

SUPERVISING SOUND: THE ART OF PUTTING IT ALL TOGETHER

We’re excited to welcome Supervising Sound Editor Mandell Winter to help us kick off this new year! Mandell will lead a discussion on the

workflow and approach used on the feature film, The Magnificent Seven. He will take us through starting the project early, meeting and interviewing foley artists and mixers, the process of creating a library for the editors, recording black powder guns as well as some early loop group elements and working with changes, predubs and final mixing in ProTools with S6. This is a great chance to get the inside scoop on what it takes to create the soundscape for a big budget Hollywood action film.

Mandell Winter has contributed his talents as a sound supervisor and editor to more than 70 feature films. His most recent project was the Netflix Original Series The OA.  Other notable credits in addition to The Magnificent Seven include True Detective: Season 2 and Southpaw. Winter studied film production at the University of Colorado, Boulder, and began his career at The Post Group. He became a sound editor at Technicolor and further refined his skills with Wildfire Studios.  Mandell is currently working on a feature at Sony.

please send an email to rsvp-at-lappg-dot-com

As always there will be plenty of time to network, enjoy some coffee and participate in our great giveaway! $5.00 kindly requested at the door will include 1 giveaway ticket.

*There is street parking as well as parking in Crossroads parking lot on 22nd Street.

At Our Last Meeting:

At our December 14th meeting the LAPPG community came together and donated 250 cans of non-perishable food items to the Westside Food Bank for those in need. A warm thank you to all our generous members who were able to give what they could this year to help fight hunger. 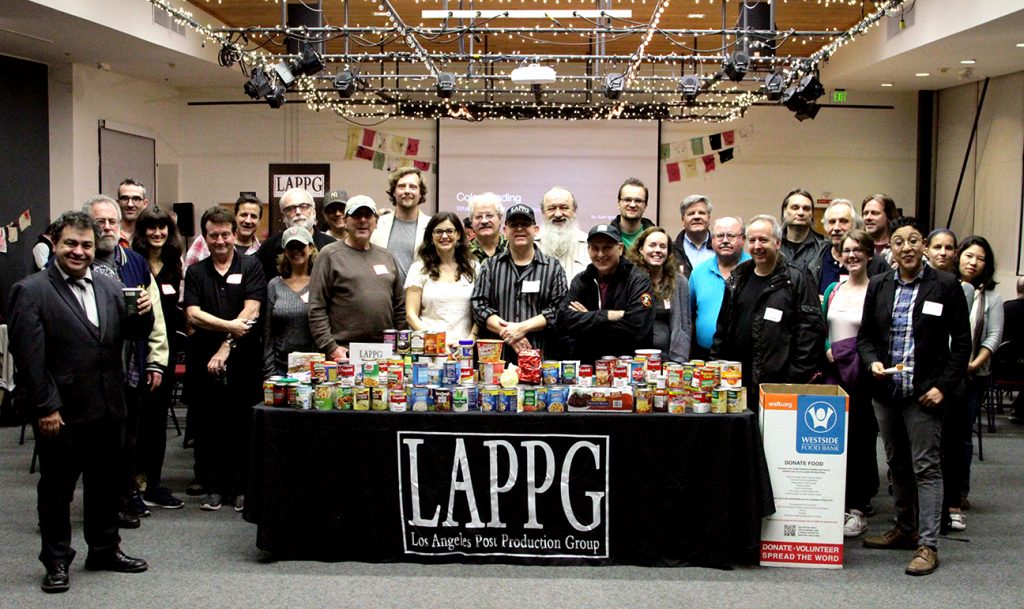 in Past Meetings /by Wendy Woodhall/#permalink