A professional organization for filmmakers to learn, share and network since 2008.

Ever wanted to work with other post production artists on the same project at the same time… from anywhere in the world? Join us as Blackmagic’s Resolve expert Shawn Carlson breaks down the Blackmagic Cloud, and shows us how Blackmagic Design is opening a world of possibilities for your post workflow.

You can also win a seat of DaVinci Resolve Studio, too! 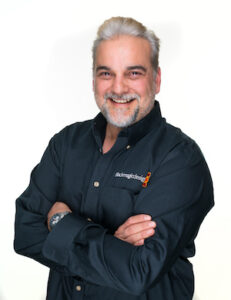 *We will be hosting our monthly prize giveaway. To be eligible to participate you must stay to the end of the meeting.

**We will be contacting the winners the day after the meeting so be sure to use your current email address when you register so we can let you you if you win!

LAPPG PRESENTS: EXPLORING THE RESTORATION OF 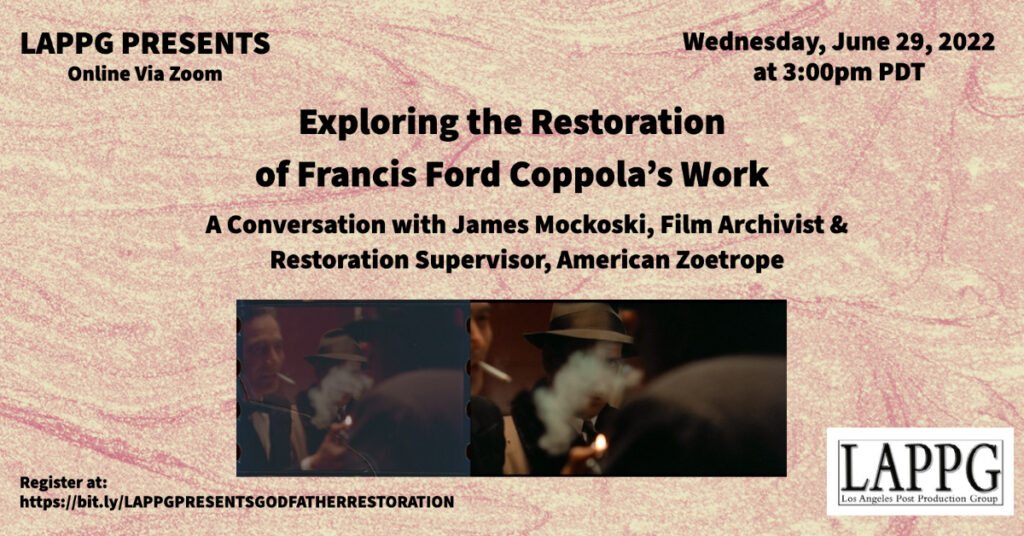 LAPPG is proud to host this exclusive conversation with American Zoetrope’s James Mockoski about restoring The Godfather for its 50th Anniversary, as well as his work on The Outsiders, The Cotton Club, and Apocalypse Now.

Jay Holben, veteran director/producer and 25-year contributor to industry bible, American Cinematographer, will moderate this deep-dive talk with Mr. Mockoski about his work as American Zoetrope’s longtime Film Archivist & Restoration Supervisor. We will hear about his role in overseeing legendary director’s cannon and preserving/restoring all these iconic films. In addition, expect some behind the scenes workflow details about how The Godfather was restored from its original film material to its currently available 4K Blu-Ray release edition. Lastly, we’ll learn about the recent restoration of The Outsiders, The Cotton Club, Apocalypse Now; and currently One From The Heart.

This unique conversation will cover both the science and artistry required to bring Francis Ford Coppola’s work back to its intended look and feel.

James Mockoski, received his B.A. in Film/Video from UCSC and graduated with a M.A. in Film Archiving from the University of East Anglia.  In 2002, he joined Francis Ford Coppola’s company, American Zoetrope, as their Film Archivist and he has supervised the restorations of some classic films such as Apocalypse Now, The Conversation, Tucker, and The Cotton Club.  He also oversees the Coppola Family Archive of Costumes and memorabilia, including the Museum Collection held at Inglenook Winery and Francis Coppola Winery in Geyserville, CA.

Jay Holben is an independent director and producer based in Los Angeles. A former cinematographer, Holben is an associate member of the ASC, the chair of the ASC Motion Imaging Technology Council’s Lens Committee, vice-chair of the ASC MITC Virtual Production Committee and technical contributing editor for American Cinematographer Magazine. He is also the author of three books on cinematography: A Shot in the Dark, Behind the Lens and the recent The Cine Lens Manual. 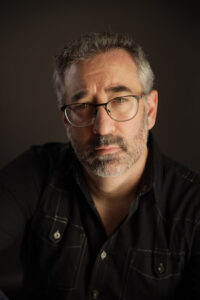 Join us as we celebrate our 14th anniversary and find out more about the advanced HELO Plus from AJA Video Systems and how we can connect post production using next generation streaming workflows. AJA’s Product Marketing Manager, Andy Bellamy, will be joining us again this year plus, we’ll be giving away a T-TAP Pro and many other valuable giveaways! Come celebrate community and new technology! 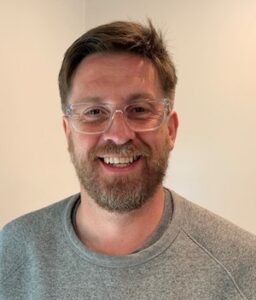 Frame.io will visit LAPPG to for our May online meeting and headlining the event is Frame.io’s Sr. Director of Global Innovation, Michael Cioni! Michael will lead an audience participation demonstration of the transformative Camera to Cloud workflow for automatically and instantly transmitting picture and sound files from set to editorial – including the recently announced integrations with Filmic Pro, Atomos, and Viviana Cloud.  He will also discuss the new Frame.io app for Apple TV, integration with Baselight, and security enhancements.  Get a firsthand look at how Adobe and Frame.io are reimagining industry conventions to create the world’s most collaborative media production workspace.

Michael Cioni has been recognized as one of Hollywood’s most influential people in tech by The Hollywood Reporter. A four-time Emmy winner, he was the co-founder and CEO of the post house Light Iron — acquired by Panavision — and served as product director for Panavision’s Millennium DXL 8K camera ecosystem. As Senior Director of Global Innovation at Frame.io, an Adobe company, Cioni leads numerous workflow innovations including the transformative Camera to Cloud technology.

An active member of the Academy of Motion Picture Arts and Sciences and associate member of the American Society of Cinematographers, Cioni focuses his efforts on combining aspects of technology and creativity together within the filmmaking community, as well as mentoring and educating throughout the global media industry.

*We will be hosting our monthly giveaway off line after our meeting. In order to be eligible to win a prize you must stay to the end of the meeting.

**Please use your current email address when you register so we can contact you if you win!

***This meeting will also be streamed live on YouTube. 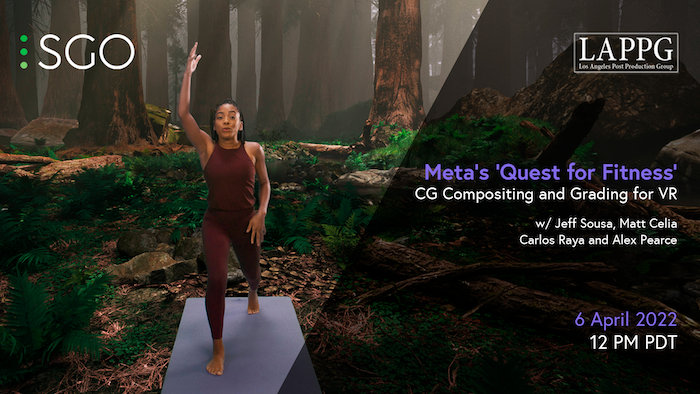 Join the upcoming LAPPG monthly meeting and discover how LA boutique production company Lightsail VR collaborated remotely with NYC post-production studio Dungeon Beach to create Meta’s “Quest for Fitness: Escape and Shape”, a high-end interactive VR project for Oculus headset. You will get to discover how to do a remote grade where both – the colorist and the client are wearing the VR headset!

In this exciting session, our speakers will first focus on the production point of view and reveal how they created 3D backgrounds in Blender and combined them with live captured images. After that we will dive deeper into color grading and finishing workflow, highlighting the main reasons for deploying the ACES pipeline, how they fully exploit Mistika Boutique’s DI functionality to grade 3D media and share their experience with live color grading – in the VR headset. 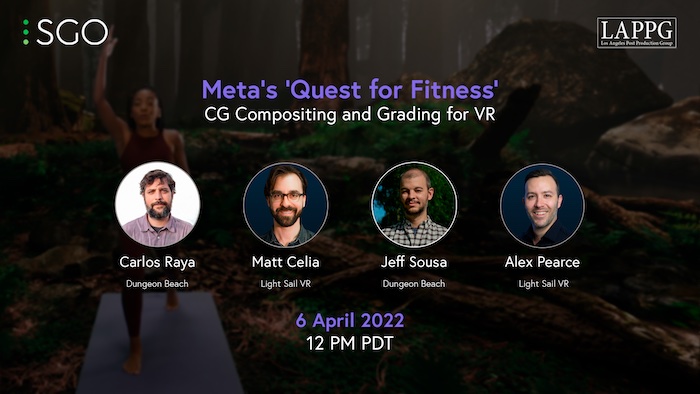 Matthew Celia is the co-founder and creative director of Light Sail VR, a boutique creative studio pushing the boundaries of immersive storytelling. Light Sail VR specializes in creating immersive content with compelling characters and stunning visuals for both brands and original programming. They have worked with some of media’s biggest brands like Google, Refinery 29, Condé Nast and Paramount Pictures. Matthew’s main goal at Light Sail VR is simply to continue making VR more accessible and easy to use for his clients, and help them create the best content for their audience.

Jeff Sousa is supervising colorist at Dungeon Beach, a boutique post house in Brooklyn offering audio and picture finishing services under one roof. He’s energized by the storytelling breakthroughs made possible when the entire team is together during the home stretch. Jeff believes in the visceral power of color and tone to meld your mind with a film’s protagonist. He likes to turn knobs until you feel something. Jeff’s visual sensibilities come from a background in directing and general cinephilia. He received his MFA from Columbia University in 2010 and, before that, studied film history at The University of Chicago. Jeff has lived abroad in Spain and Japan, and frequently collaborates with Japanese DPs on everything from Netflix Original Series to AAA music videos from Japan’s biggest boy band. Jeff lives with his wife and two kids in Sunset Park.

Alex Pearce is a Partner and Senior Creative Technologist at Light Sail VR and oversees the technical side including virtual production, photo real visual effects, 3D pre-visualization as well as augmenting 360 video and real-time game engine development efforts. Alex’s many years of experience as an industry thought leader has enabled his success with major clients including Apple, Google, United Airlines, Kia, VMware and the NFL, to name a few.

Carlos Raya is Senior VFX Compositor at Dungeon Beach. He studied Media Communication and after starting as a freelance editor, enjoyed being a part-time DJ at music festivals in Spain. This led him to finding new ways of impacting audiences by manipulating pixels through VFX, instead of frames with editing. After studying Compositing in Barcelona, he started working at studios in Spain and Germany and then remotely freelancing for VFX studios as well as post houses in Los Angeles, Canada, Netherlands and UK. His main tools are Nuke and Mocha, but has been diving deep into Fusion Studio for his 360º trips together with Light Sail VR. Carlos is currently based in Sevilla. 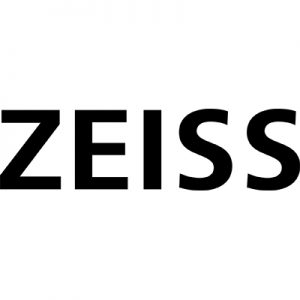 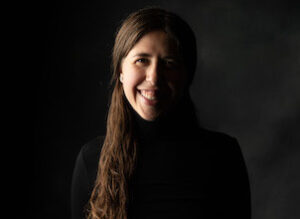 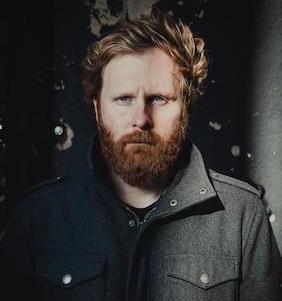