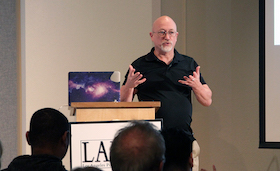 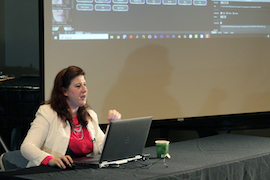 Senior Product Specialist Mary Poplin of Boris FX took us on a tour of the new 2020 releases or Continuum, Sapphire and Mocha Pro as well as a look at the newly acquired Silhouette.

in Uncategorized /by Wendy Woodhall/#permalink
February 16, 2020 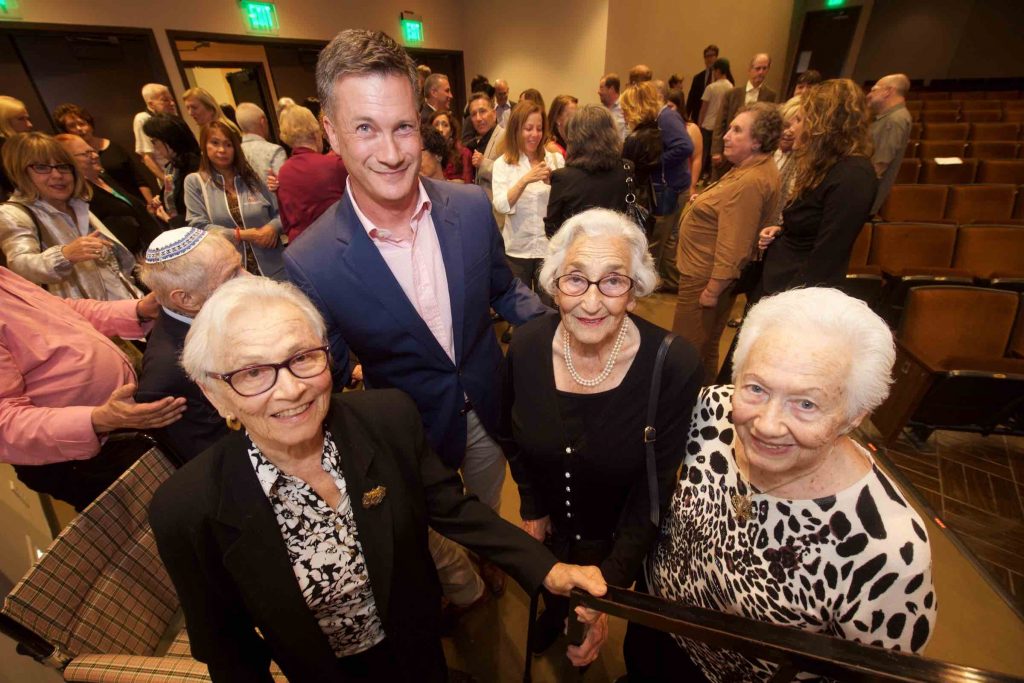 Director Jon Kean with three of the amazing Holocaust survivors who served as subjects in two of his documentary films.

Jon Kean & Anne Stein, the director/editor team behind the documentaries Swimming in Auschwitz and After Auschwitz will be presenting their experiences working in the biographical documentary genre.  They will discuss the creative and technical strategies and descisions that were used to bring these historically significant films to life.

Jon, who started in the theatre world in LA and New York, has been a filmmaker since his directing debut Kill the Man opened at Sundance in 1999. He is currently in production on two new documentaries including a project about Rwanda 25 years post-genocide.

Anne started her editing career in the sound department of Milos Forman’s film, Hair. As an editor she has worked extensively with Freida Lee Mock as well as other Los Angeles based directors and has always gravitated to projects that reflect a social and emotional sensibility in line with her personal values.

Send an email to rsvp-at-lappg-dot-com.

As always there will be plenty of time to network, enjoy some coffee and participate in our great giveaway!

$8.00 kindly requested at the door will include 1 giveaway ticket.

*There is street parking as well as a Crossroads parking lot on 22nd Street. Please view this map for parking info. We encourage ridesharing or using public transportation as there are two Metro Expo Line stops within walking distance to Roth Hall.

For the 2nd year in a row we had a Valentine’s meeting visit from the LOVE-ly Mary Poplin from Boris FX. The evening started with members checking in and each receiving beautiful journals and pens from the our fantastic partner, Shutterstock. These were used to take notes during our first presentation and for our members to use to do their own journaling to help reduce stress. The journaling advice was only a small part of the wisdom that came from the entertaining and informative presentation from Licensed Marriage and Family Therapists Bill Leavitt. He discussed the often ignored topic of mental well-being and shared insights on the topic of stress which affects many of us in this industry when we are dealing with job insecurity, deadlines and long work hours. He shared some helpful tools for dealing with stress including The Four Fold Breath and No-Thing Meditation.

After his presentation we enjoyed some Valentine’s themed refreshments during the networking break and then Boris FX’s Senior Product Specialist Mary Poplin came to the stage to present an overview of the latest 2020 releases of Sapphire, Continuum and Mocha Pro. There was a lot of ground to cover and Mary, in her own inimitable fashion, knocked it out of the park by showing us many new features as well as showcasing the power of the newly acquired Silhouette. Silhouette is a best-in-class, GPU-accelerated compositing application, delivering the industry’s most robust, non-destructive, paint and roto tools for feature film and visual effects teams. We were all wowed! At the end of the evening we had another amazing giveaway thanks to our generous partners.

in Photography /by Wendy Woodhall/#permalink
February 4, 2020

Calling all bi-coastal and NYC members! Join Panasonic on February 19, 2020 for a free 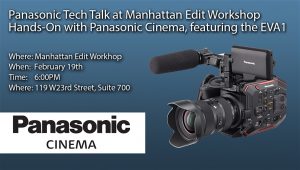 Tech Talk at Manhattan Edit Workshop! They will have multiple EVA1 kits for attendees to get hands-on time exploring along with the Panasonic VariCam and the all-in-one CX350 camcorder. Panasonic experts will present and be available to answer questions on the cameras, and guest Cinematographer Jodi Savitz will discuss how they use the Panasonic cameras in their work.

This is a free event and details and registration are here.

$500 Off First Class at Trade/Craft

Trade/Craft is a unique trade school that teaches not just the theory, but the practical, day to day job that you will need to know; everything from the forms you need, the way you talk to other creatives and literally the what-do-I-do-on-day-one questions for the job. Our instructors are not only experts, but they are working in the industry they are teaching as we speak, so they know how it’s done, and can teach you how to do it right.

Add to that our new Placement Portal, and you have a better chance of landing the job of your dreams more quickly. Simply take a class, get Certified by our industry panel, and your resume will be sent directly to a number of great companies who look to hire trained talent just like you! See the list of who is in our Placement Portal now HERE  and check back often. We’re always adding more companies from around the industry who are eager to be a part of Trade/Craft.

Now all they need is you.

LAPPG Members can take advantage of this discount code: LAPPG500 for $500 off their first class!